Poblenou is the area between the Villa Olimpica and Diagonal Mar. A hidden jewel in Barcelona, one of the areas close enough to all the tourist attractions but without the hustle and bustle. This area used to be full of industrial factories has slowly changed into the new Meatpacking District of Barcelona. Full of sought after lofts, art galleries, studios for artists, graphic designers, publicity agencies...

However, all of its character has remained due to its strong local community feel with it’s own Rambla de Poblenou where restaurants and shops are full of locals. Some landmarks close to the loft are the Plaça de les Glòries, Torre Agbar, designed by Jean Nouvel, the 2 towers Mapfre and The Hotel Arts, the Avinguda Diagonal, Ciudadela Park (contains the Zoo) .

This privileged loft is a 15 minute walk to the beach and a 10 minute subway ride from the center of Barcelona (the metro station is a 2 min. walk from the loft). The subway station Llacuna, L4, takes only 4 minutes to Ciudadela Park and 8 minutes to the Plaza Sant Jaume and the City Hall (Jaume I metro station) and 10 minutes to Plaza Urquinaona. L4 metro line easily connects you to all the other main features of Barcelona such as La Sagrada Familia, Paseo de Gracia with all of Gaudi´s Buildings and high-end shops. Poblenou is the area between the Villa Olimpica and Diagonal Mar. 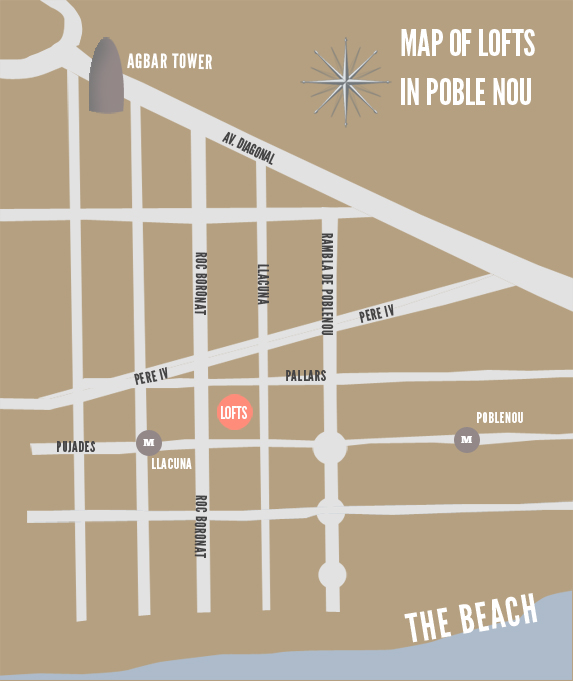